Greekfest Takeout currently closed as we prepare for the Carousel of Nations Greek Village Event on June 17, 18, 19 and June 24, 25, 26.
We are looking forward to celebrating with you outdoors once again.

Book your special day with the Hellenic Cultural Centre and experience expert professional and personal service, with all the features that a modern banquet facility can provide.

Greek families began settling in the Windsor area  in the early part of the 20th century.  Their pioneering spirits led them, in one way or another, to this area in search of a better life for their families.  Some decided to work in Canada for a while and return, while the majority chose to move their families to this country.

In this area, organizations began to form to service the common goal of furthering the Hellenic culture and Orthodox faith. During the dark years of World War II, local Greeks campaigned to raise funds and gather donations for their suffering relatives back home. The early organization collected thousands of dollars and tons of clothes for the Greek War Relief Fund of Canada.

A lot at the corner of Ellis and Dufferin was purchased in 1959 and the first phase of the Church construction, the basement, was started in 1962. 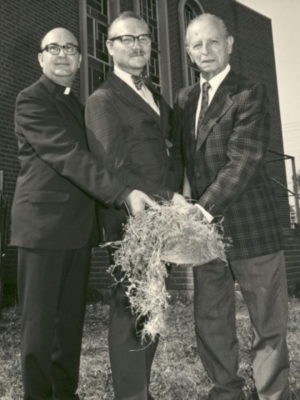 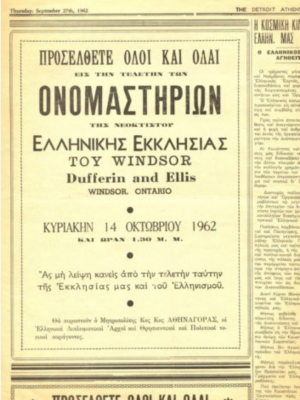 In 1971, construction was started on the second phase which would expand the building.

In September of 1975, the Church was consecrated by His Eminence Archbishop Iakovos, Primate of the Greek Orthodox Church in North and South America.

The GOYA youth group was founded in 1967 and has been an energetic and dynamic organization ever since. Through social, sports and religions events it has drawn the youth of our community together.

Services were conducted in the basement for almost ten years. With the hard work and dedication of members and with the support of Plato Association (now Philiptochos), funds were raised to complete the church nave.

In 1954, as part of the centennial celebrations for the city of Windsor, local Greeks were asked to participate in the All Nations Day. The proud and youthful Greeks of Windsor participated and continued to march in subsequent Canada Day parades. 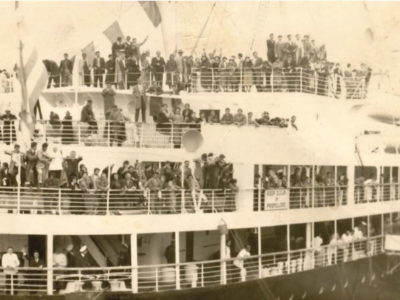 This initiative led to further social gatherings and eventually to the founding in 1954 of the Greek Orthodox Community of Windsor with 76 founding members.

Waves of thousands of new Greek settlers settled in the Windsor area. At that time the community worshiped at St. George’s Romanian Church on Pierre Street with Greek priests from Detroit.

The Vichos Lounge is closed until further notice.

From this point forward, all of our Church Services and Divine Liturgies will be conducted in Church behind closed doors by the priest, the chanter and the sexton. No Church Service or Divine Liturgy can be omitted for two main reasons:

a) In order to praise and glorify the Thrice-Holy God; and
b) For Church Services and Divine Liturgies to be streamed online through social media so that pious Christians can follow and pray along. 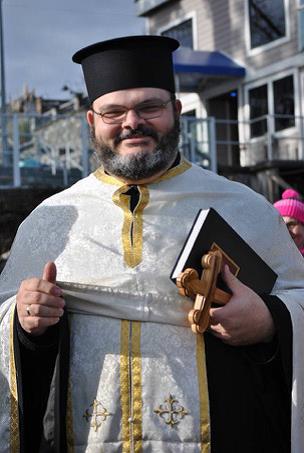 Fr. Evangelos was born in Montreal, Quebec on March 22nd, 1976 as the youngest of three siblings. Through the guidance of his spiritual father, Fr. Nicholaos Papageorgiou, he entered the Toronto Orthodox Theological Academy, thus taking the first step toward answering his calling to the priesthood. In May of 2003, he received his Theological degree.

On July 16th, 2005, Fr. Evangelos was ordained to the Holy Deaconate in his home parish of the Dormition of the Virgin Mary in Montreal, Quebec and subsequently to the Holy Priesthood on July 30th, 2005 at Sts. Nicholas and Dimitrios Church in Vancouver, British Columbia where he had served until November 30th, 2014. He then served Ypapanti Greek Orthodox Church, in Victoria British Columbia, from December 1st, 2014 to August 31st, 2017 and has been serving our community since September 1st, 2017.